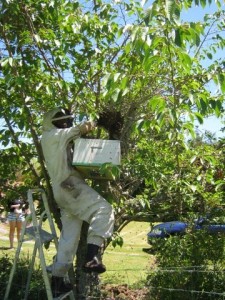 Swarming of bees is a natural part of the colony’s life cycle… Almost half of the worker bees and maybe a few drones, leave the parent hive after having starved the old queen to stop her laying and reduce her weight.

The departing swarm leaves behind a ripe queen cell that will hatch into a virgin queen, which after mating will replace the swarm queen as the egg layer. This process creates two colonies, one of which has very few resources and so is vulnerable, but the colony that remains is also vulnerable as it’s virgin has to get mated to be able to carry on.

If anyone has a swarm problem please contact the following members of our club to help capture the swarm and minimise any discomfort to the local community.